by Darcy Ellis in Productivity 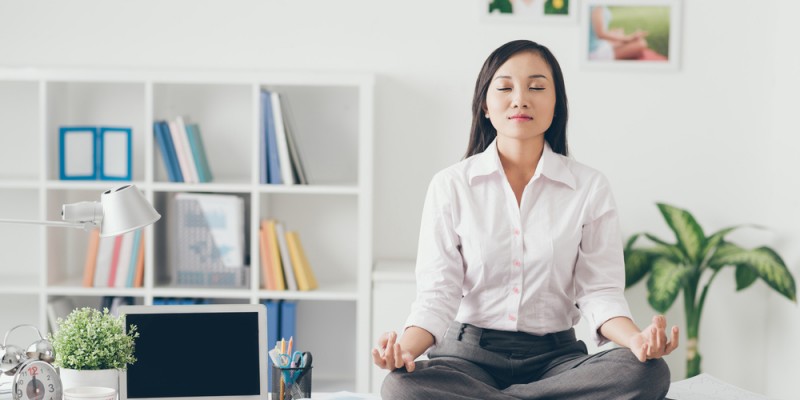 The 1992 film Glengarry Glen Ross gave us an immortal phrase, “Always Be Closing,” or “ABC.” In today’s professional world of heavy workloads, multiple projects underway simultaneously, and overlapping deadlines, ABC might as well be “ABP” — “Always Be Producing.”

Because that is what is expected of the modern professional: high levels of productivity, from the mailroom to the courtroom, to the sales department to graphic design.

Unfortunately, this kind of culture breeds astronomical stress levels — a direct result of professionals overworking themselves in an attempt to meet unrealistic goals (often self-imposed) or neglecting to practice self-care on their path to success.

The good news is we don’t have to spend our lives taking blood pressure medicine or burning the midnight oil. Practicing several simple tricks will allow us to not only remain productive but also boost our productivity without increasing either our stress or our chances of winding up in a straight jacket.

Here are ten ways to boost productivity without increasing stress.

It is entirely too easy these days to overcomplicate even the simplest of tasks. But the bottom line is there’s just no need to attach a 2-page bibliography to that report on first quarter sales projections. Nor is it necessary to spend the night at Kinko’s creating large-format color graphs when all you were asked to do was write a simple report.

Employers do love employees who show incentive and go the extra mile, but sometimes taking inordinate amounts of time and brainpower to stand above the crowd only hurts you in the long run: you’ve now got to play catch-up on other projects and you’ve kind of come off across as the professional equivalent of a grade-grubber. Chances are most employers would rather have accurate, efficient work delivered as expected, and on time, than a showy display of “look how clever I am.”

While this should be a no-brainer, eliminating distractions can be trickier than it sounds. Distractions take many forms and can be as obvious as a radio station blaring in the background or as insidious as your cell phone “tinging” social media updates for 8 hours. If you work from home, a pleasant sunny day beckoning from beyond the front door can be an intense rival to the tasks you’ve assigned yourself, while a cuddly kitty certainly offers its own distracting appeal.

Whatever the distraction is, the key to fighting it will be discipline. Give yourself some help by offering yourself an incentive. For example, if you can stay off social media all work day — assuming it’s not part of your job — then reward yourself at night with a fancy pasta dinner or a much-needed run or hike. Maybe just knowing you’ll get home at a reasonable hour if you take fewer water cooler breaks is incentive enough to be as productive as possible. Because in the end, that’s what you’re doing: saving yourself unnecessary hours at the office by staying focused and buckling down. Just make sure you still take the occasional 10-minute break, which will allow to recharge your batteries and return to your work refreshed. Failing to do so will only lead to burnout.

There’s nothing worse than rolling over and over in bed at night stressing about a seemingly tangled mess of appointments, phone calls, meetings, emails, and reports — and then to show up at work the next morning not even knowing where to begin. Or worse, spending half your day on a task that was low on the priority scale. Avoid falling victim to this vicious cycle and productivity blocker by breaking down the day ahead of you task by task. Rate each task by order of importance and create an effective workflow. Call it a “To Do” list, if you will. Just get it out of your brain and on paper.

We’ve all done it: put off until the last minute a major undertaking we’re dreading for some reason — maybe because it’s time-consuming, high-stress, or intimidating. But the longer we put off tasks, letting them become gremlins in the back of our minds, the more stressed we get, which begins to impact the other tasks we’re doing while we drag our feet. The simple fact is tackling those seemingly dreadful chores head-on brings both a sense of accomplishment and relief, and frees our minds to fully embrace the rest of the tasks facing us — increasing our productivity and reducing our stress, in other words.

5. Don’t Get Bogged Down

On the flip side of going full bore on a project is making sure we don’t get caught up in “red herring” details — minor issues that drain our attention and productivity. For example, rather than stressing for two days about which font to use on a report, stop trying to reinvent the wheel and select a font that’s commonly accepted in-house. Then move on with your life; you’re not a graphic designer. Obsessing over minor issues like this is just another form of procrastination. Learn to recognize it and you’ll learn to recognize what’s important and what’s not, resulting in a more streamlined workflow.

In a competitive work environment, asking a colleague or supervisor for help with a task or project can seem like a death sentence, an announcement to the office that you are incapable and need someone else to do your job for you. On the contrary, in any work environment, if a project manager or boss values quality work, it should say that you are doing your due diligence — making every effort possible to get it right. And that should be the bottom line, right? A quality product? There should be no shame in admitting you don’t know how to access certain information, or that you can’t get a particular program to work. More practically, it will help remove whatever stumbling block was in your way, allowing you to be productive once more and a little less stressed out. Get the answers you need and move on. However, once someone shows you to solve a problem, remember the solution. One of the deadly sins in any workplace is having to repeatedly be shown how to do something.

Sometimes, there’s just denying you’ve been assigned or have taken on a task for which you just are not suited. Trying to fit the square peg (you) in the round hole (the task) is ultimately just a waste of everyone’s time. Again, there should be no shame in admitting you’re working outside of your wheelhouse. In fact, it demonstrates you’re a team player — as long as you’re willing to take on an equal amount of work in a field with which you have more experience. You don’t want to appear lazy or as if you’re pawning work off on someone else. Rather, if you’ve run into a brick wall, find someone more suited to the task at hand and give them a chance to excel and shine instead of trying to clumsily do it yourself. This allows all involved to get back to being productive.

8. Take Care of Yourself

The link between personal health and productivity at the office is an important one. If you’re not sleeping at night you can’t very well be expected to churn out quality work the next day. Likewise, if your diet consists of energy drinks and fast food, chances are very good you’re not operating at optimal levels. Getting enough sleep, getting exercise, eating healthy — these are all essential to performing well on the job and keeping stress levels low.

Happy workers are productive workers. If listening to your iPod makes you happy — and isn’t a distraction — then invest in some great earbuds and enjoy yourself as you crank out those reports. Maybe spruce up your office with some houseplants that you find calming, or attach photos of inspirational figures to your walls. Whatever keeps you calm, happy, and motivated will likely keep you productive and less stressed. Just make sure not to lose valuable work time staring dreamily at that autographed photo of Elon Musk.

Do you have any tips to boost productivity? Share them in the comments below!