When I first graduated from college in the 1990’s, I went into an executive buying program for a national retailer. I envisioned a life of traversing New York City offices bursting with high-end fashion, with models walking the hallways, with the office decor reflecting the lifestyle and brand we portrayed in our advertising.

The reality was quite different. My first buying assignment was in Christmas cards, gift wrap and picture frames. My “office” was not a Steelcase shrine to productivity; it was a former merchandise storage area off the main floor that had been converted into a buying office that held three merchants, their assistants and a planner. Not to mention this archaic relic called a fax machine. How else would you communicate with the outside world? At least we were not relegated to those huge floors with rows and rows of Dilbert cubes that we lovingly called “feeding pens” because literally, if you just put a ceiling with bars across the top, it would have been a great cage for lions and tigers and such.

However, it was in this environment that I was given the base from which I learned a variety of skills: how to strategically plan and forecast a “widget” business, the 5 P’s of marketing anything (product, plan, place, promote and people), fiscal responsibility and negotiation to count a few. Not to mention the social implications of being in a space like this; you quickly learned the hierarchy of corporate america, the value of space in the office and the reflection it has on your status. The haves and have nots were identified with ease. In fact we had routine wagers on who the next person to ‘part ways’ with the company would be based upon their seating assignment. The movie Office Space characterizes this period with exceptional accuracy.

Fast forward a few years and I had a few different offices under my belt, I had made it; I can still picture the glass fish bowl that overlooked sailboats going under the San Francisco Bay Bridge. And then there was the 8×10 coffin with a rear window that had a direct line to the Empire State Building, which was magnificent at night. I had waited years to be able to close the door behind me… however something was missing. I had teams and direct reports, yet I was the one that felt isolated and alone. I kind of longed to be back in the feeding pens; well “longed for” might be a bit strong.

After 10 years in the corporate world, I decided to leave, looking to feed my inner entrepreneur. I landed in a commercial furniture dealership as a principal. I was determined to pay special attention to the culture– that was the really our only competitive advantage. We were fun, innovative and even playful. We set up the office in an open plan with partners in an open alcove and everyone else in the open area. I even took a 6×8 cube, adopting the Michael Bloomberg philosophy of bullpen management. The results in the beginning were exactly what I had hoped for; fostering a familial relationship where it was all hands on deck. No person left behind. One for all. etc. This was ideal right? Well when times are good and it’s all new, yes, then it was ideal. But when you inevitably hit a few rough patches, either personally, professionally or as a company, it’s not always ideal. There are conversations and issues that can become bigger and less manageable the more people are aware of the inner workings. In the worst case scenario, it can cause hearsay and rumors to run rampant.

So what’s a happy medium? For the past year plus, I have been working from a “free address” environment within a large commercial dealership. This means there are no assigned seats and you get a locker to store your stuff. While at first, it was a bit hard to adjust to, I soon realized it was incredibly liberating, delivering happiness if you will. While not for everyone, for sure, my productivity went through the roof. I found a surge in both focus time as well as collaborative time. Not to mention those little nuggets of serendipity that come from sitting randomly near others. I realize this is very dependent on your job function, personality and probably even more so on your overall outlook on life (what isn’t though?).

Today, my office is wherever I am. I started this post from my favorite Mexican restaurant while waiting for a client. Now I am finishing it while at a Pret in Soho, NYC, killing a few minutes before a new ribbon cutting for a large corporate client’s new workplace of the future. And yes, there are offices, cubes and even benches. 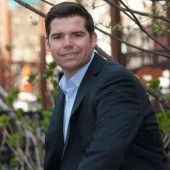 Entrepreneur in corporate clothing. Relationships are my capital, furniture happens to be the commodity I trade in, operating from the platform of Empire Office. I provide real business solutions for using your space as an investment.
Read more by Jeremy Jennings »